“Knowledge, attitudes, and practices towards the risk of zoonotic diseases, wildlife trade and wildlife consumption in Latin America” („KAP-Study wildlife“)

The project aims to identify knowledge, attitudes, and practices towards the risk of zoonotic diseases, wildlife trade, and consumption in different populations living in urban and rural areas, including indigenous communities, of Latin America. Based on its results, we will develop innovative approaches, according to local context, to educate communities, and co-construct behavioural change approaches to raise awareness and change behaviour in the population.

Wild animals are an important and integral part of biodiversity, which in turn ensures the health of humans. They are also a source of known and currently unknown pathogens, some of which have the potential to become pandemic in humans. The COVID-19 pandemic has highlighted the importance of human-wildlife interaction and the need to move to a more sustainable, less risky relationship with nature. In this sense, new strategies have emerged to promote positive conservation attitudes and behaviors to the wildlife by the general public and specific target groups. This may result in sharing of resources and mutual benefits. By many populations, wildlife is valued positively concerning its socio-cultural, nutritional, economic and ecological role. The positive effect of nature on the health and well-being of populations has recently been evaluated in many studies. Based on them, considering green spaces in the design of urban areas and minimizing the negative impact on wildlife will benefit both people and wildlife.

Around 60% of all emerging human infectious diseases are assigned to zoonotic origins, the majority of these has its origin in wildlife, keeping in mind, that transmission occurs not only linearly. In most of the cases multiple species are involved as hosts, including both domestic and wild animals. Deforestation, land use transformations and growing urbanization are causes of an increasing reduction of wildlife habitats. They lead to a closer contact between humans and animals and therefore a higher probability of pathogens crossing the species boundary. Conversely, the protection of biodiversity is capable of reducing zoonotic risk.

In this context, one of the major threats to wildlife health, human health and conservation of biodiversity is wildlife trade. On trade routes and markets, live and dead wild animals are in a closer contact than they would be in their natural habitats, which opens new pathways of pathogen exchange. Wildlife handling and the consumption of wild animals also represent possible ways of pathogen transfer, besides the nutritional source of wild meat. Its likelihood depends on food hygiene practices and knowledge of wildlife handling which might differ considerably across local contexts.

Latin America is one of the most biodiverse regions in the world. Like other regions, it faces some significant challenges in terms of conservation and wildlife trade. Indiscriminate hunting and fishing, increasingly frequent fires and uncritical felling of trees put biodiversity at risk and increase human-wildlife conflicts, also increasing the risk for new zoonotic diseases.

WP1 involves an initial approach to the communities to obtain baseline information about knowledge, beliefs, and perceptions; experiences in relation to risk of zoonotic diseases, wildlife trade, and consumption. In four Latin American countries, we analyse differences and common grounds among people living in urban, rural, and indigenous communities. We also explore needs and preferences for training.

WP2 collects and analyses qualitative information by key stakeholder interviews and focus group discussions. The main outcomes are the vision and position of certain groups on the subject, as well as their experiences and perceptions on zoonotic diseases, wildlife trade and consumption. Barriers and facilitators for the implementation of intervention strategies in the different populations are identified.

In WP3 community representatives and interested groups work together with a multidisciplinary and inter-sectoral team. We analyse the current situation of wildlife in the specific community and the conflicts in human-wildlife interaction. Subsequently, problems are prioritized to be addressed in the short and medium term, implementation strategies will be discussed.

WP5 aims at project dissemination at different levels. Methods and results of the project will be shared with the scientific community and members of the Alliance against Health Risks in Wildlife Trade. Activities of the project target the general population, organizations, activists, policy makers and other interest groups. Spaces for exchange and socialization of the project with policy makers will be promoted so the project outcomes can be considered in the local development and implementation of strategies for the regulation of wildlife trade and consumption in Latin America.

The study takes place in the lowland areas of Bolivia, Brazil, Chile and Guatemala. In each country, one geographical area has been selected for the project in order to cover a wide range of Latin American climate, biodiversity, wildlife and culture, considering rural and urban areas: 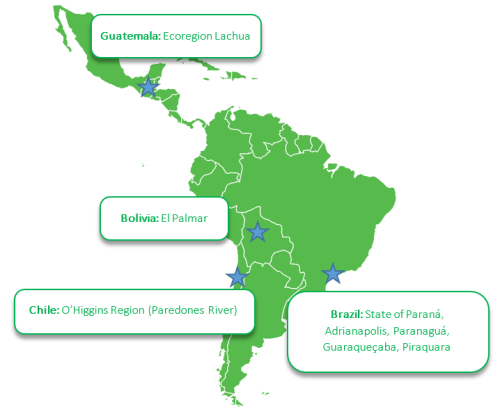 In this process, the study applies both quantitative and qualitative research methods. The quantitative KAP-study ensures the representativeness and significance of knowledge, attitudes and practices. The qualitative part of the study (interviews, discussions, round-tables) allows the enrichment with background knowledge and the interaction with and participation of involved persons and representatives. We designed the study as an international, interdisciplinary and inter-sectoral project. The staff is located in five different countries. It is experienced in international and multilingual teamwork. We hypothesize that it is enhancing to encounter global health and environmental challenges with an interdisciplinary approach. Therefore, the team is composed of human physicians, as well as veterinarians, environmental and social scientists. The study thrives on the participation of its subjects, so the aim is to allow inter-sectoral exchange by including the general population along the steps of the study.

The Center for International Health of the LMU Hospital works together in this project with its partner universities in four Latin American countries:

The project is financially supported by a fund of the German Federal Ministry for Economic Collaboration and Development (BMZ) through the International Alliance against Health Risks in Wildlife Trade and coordinated by the GIZ (Gesellschaft für Internationale Zusammenarbeit).

The following video shows the vision and aims of the International Alliace against Health Risks in Wildlife Trade and its project partners: